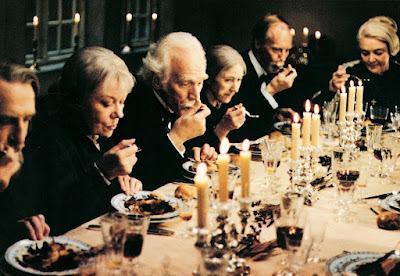 Babette's Feast is a 1987 Danish film, based on a 1950s short story by Danish author Karen Blixen. [2] The film is directed by Gabriel Axel, and won the Academy Award for Best Foreign Language Film – ahead of, among others, the Norwegian Pathfinder. It is said to portray Catholicism in a positive light, [3] and Pope Francis has actually described it as his favorite film. [4] In this review, I will try to show how the film brings out some of the differences between Catholic and Protestant culture, and discuss how the feast itself can be understood as a sacramental sign of the heavenly wedding feast.

The plot of the film takes place around the middle and towards the end of the 19th century, primarily in Denmark. We are introduced to a small village on the windswept west coast of Jutland, where most of the population belongs to a 'devout sect' of puritanical (particularly austere and anti-Catholic) Protestants – more on this later. [5] The sect was founded by an old pastor, who presumably broke off from the Lutheran Church of Denmark and lives with his two young daughters, Martine and Filippa. To emphasise the strongly Protestant atmosphere of the village, we are told that they are named after the German Reformers Martin Luther and Philip Melanchthon.

Both Martine and Filippa possess a striking physical beauty, but in the puritanical sect, marriage and 'earthly love' are looked upon as 'empty illusions'. The old pastor wants his daughters to continue to assist him in his work, and therefore refuses to marry them to the young men who attend church in order to catch a glimpse of them. It is a typical feature of puritanical Protestantism that one views the body and the joys of this life as something inferior, as something one should probably stay away from in order to focus solely on the spiritual life. In this sense, it can be reminiscent of the Gnostic heresy, which teaches that the physical world is evil. Some have argued that this is precisely what Paul is referring to when he writes of a group of heretics who 'forbid marriage and enjoin abstinence from food' (1 Tim. 4:3).
Read more: Beauty as a Ladder to God: An Essay on Aesthetics
Then one day Lorens Löwenhielm, a young Swedish officer, visits his old aunt who lives at the manor house Nørre Vosborg in Jutland. While out riding near the small village, he sees Martine and is completely captivated by her. Lorens' aunt is acquainted with the congregation, and gives his nephew access to the pastor's house – so that he can get closer to Martine. But Lorens achieves no success with the courtship, and decides to return to Sweden. As his attempt to win the love of his life fails, he decides to fill his life with other things: 'I want to concentrate on my career, and one day I will cut a brilliant figure in a brilliant world.' He soon learns that this is vain, and 'all is vanity' (Eccl. 12:8).

We are then introduced to the French opera singer Achille Papin, who feels burned out towards the end of a long career. After a performance in Stockholm he is told about the west coast of Jutland, a place where he can enjoy the silence and the lapping of the waves. One day as he sits and looks out over the sea, he hears the sound of beautiful singing from the nearby church. He walks in, makes the sign of the cross – yes, he is a Catholic – and sits down in a pew. There he is captivated by the singing voice of the pastor's daughters, but most of all by the lovely Filippa. Achille makes a silent prayer to God, imagining a bright future: 'Almighty God, your mercy reaches to Heaven, and your justice goes to the bottom of the sea. Here is an opera primadonna, who will lay Paris at her feet.' After the service, Achille goes to visit the pastor's house, where the following conversation takes place (translated from French):

Achille: I would like to take the young lady who lives here, as a student. She has a beautiful voice and can sing like an angel. That is important when you want to praise God.

The pastor: Are you a papist?

Achille: Yes, a Catholic... a papist.

It is not clear exactly why the pastor is asking this question. Maybe simply because the stranger is a Frenchman, but maybe also because he emphasises the importance of 'a beautiful voice' to praise God. Catholicism undeniably places a greater emphasis on beauty and the external, aesthetic dimension of the faith – think of liturgical vestments with gold and embroidery, stained glass windows, organ music and Gregorian chant in the Mass – unlike the puritanical Protestants with their mostly interior faith and simple, whitewashed churches. The old pastor at first seems shocked to have a genuine 'papist' (i.e., one who submits to the Pope in Rome) at his door, but he does invite Achille into his house. He even agrees to let him give singing lessons to Filippa.

Edifying hymns by Petter Dass are one thing, but the pastor gets worried when Achille and Filippa start singing love songs. One of these ends like this (again translated from French): 'It's you, it's you I love; our hearts love each other; love will unite us.' Achille kisses Filippa on the forehead and repeats with sincerity: 'Love will unite us.' He is in a happy mood after expressing his feelings for the woman he loves, but Filippa tells her father that she does not want to continue with the singing lessons. When Achille hears the bad news, he is heartbroken and leaves with the first boat back to Paris. From a puritanical standpoint, it can be considered sinful to express one's love in a 'worldly' way – that is, without explicit reference to God.
Watch/listen: Herre Gud, Ditt Dyre Navn og Ære
One stormy night many years later, Martine and Filippa – who are both still unmarried – are visited by a woman who seems to be doing poorly. She brings a letter from Achille Papin, which is read aloud by Filippa. Here follows an excerpt describing civil war-like conditions in the streets of Paris in 1871, from which the foreign woman has fled:

Do you remember me? When I think of you, my heart is filled with lilies. Will the memory of a Frenchman's affection move your heart to save a French woman's life?

The unhappy Madam Babette Hersant, like my beautiful Empress, has had to flee from Paris. The civil war has raged in our streets. Madam Hersant's husband and son have been shot. She has barely escaped Galliffet's bloodstained hands. She has lost everything she owned and does not dare to stay in France.

The mechanisation of the conception of nature in [René] Descartes and [Isaac] Newton tells us what one refuses to look for in the world of nature... There is no meaning, truth, goodness, or purpose out there... All such things are created in our own self. Nature is not a beautiful order, as it was for Aristotle, or a book, as it had been for the Christians, but a machine, a piece of clockwork. This is the basic, modern prejudice... [8]

The Catholic Church, on the other hand, has kept the Aristotelian doctrine of inherent purposes in nature in the works of Saint Thomas Aquinas. Catholicism has also been described as a 'sacramental' worldview, where the physical elements of creation are seen as signs of underlying spiritual realities. Even the seemingly most ordinary things are created by God, and can therefore bring us closer to Him. The water in lakes, rivers, and waterfalls can wash our bodies clean, but also signifies a deeper purification of the soul – which is realised in the sacrament of baptism. Our earthly fathers point to our Father in Heaven, 'from whom every family [patria = fatherhood] in Heaven and on earth is named' (Eph. 3:15), and the earthly union of man and woman in marriage is a sign of the heavenly union of Christ and the Church.
So it is with food and drink. The physical food we eat every day not only nourishes our bodies, but points beyond itself to something that will give us spiritual nourishment: 'My food is to do the will of Him who sent me, and to accomplish His work' (John 4:34). This is true soul food. With the 'eyes of faith' we can look at Babette's feast as a true sign of the bliss that awaits us in Heaven. As the king says through his servants in the Parable of the Wedding Banquet: 'Behold, I have made ready my dinner, my oxen and my fat calves are killed, and everything is ready; come to the marriage feast' (Matt. 22:4). This should make us recognise the deep meaning of every meal we eat, especially when we share it with other people. The primary purpose of the meal is to nourish our bodies, but the secondary purpose is social bonding. The effect of this is shown in the reconciliation between the quarrelsome dinner guests.
That a film like Babette's Feast is capable of provoking the thoughts that I have tried to formulate (albeit quite insufficiently) in this post, can be nothing but a testimony to the quality of the film. Yet there are several aspects of its content that I have not examined here, or only in a very superficial way. For this reason – and because the film is also an audiovisual masterpiece – I recommend that you, good reader, watch Babette's Feast. Do it on the basis of what I have written here, and with these words of the Almighty in mind: 'Blessed are those who are invited to the marriage supper of the Lam' (Rev. 19:9). Amen. And, to quote one of the characters in the film: Hallelujah!

[4] Kosloski, Philip. 'Why does Pope Francis want us to watch the movie 'Babette's Feast'?' Aleteia, 21 November 2016. Available at: https://aleteia.org/2016/11/21/why-does-pope-francis-want-us-to-watch-the-movie-babettes-feast/. Babette's Feast is so far the only film to be mentioned (and quoted) in an official papal document. Pope Francis writes in Amoris Laetitia (19 March 2016), no. 129: 'We can think of the lovely scene in the film Babette's Feast, when the generous cook receives a grateful hug and praise: "Ah, how you will delight the angels!" It is a joy and a great consolation to bring delight to others, to see them enjoying themselves.'
[5] I use the adjective 'puritanical' here, which I think it makes sense to use in reference to more than just the 16th and 17th century sect of English Puritans. Of course, there is considerable overlap with regard to the characteristics of Puritans on the one hand and puritanical Protestants – whether Calvinist or Lutheran (as in this film) – on the other.
[6] Quoted by Bishop Robert Barron in 'The Word on Fire Show - WOF 022: The Both/And of Catholicism'. YouTube, 4 August 2016. Available at: https://www.youtube.com/watch?v=5pZ2bUdm9Uc.