The Church Confronts the Culture of Death

'When God is forgotten, [...] the creature itself grows unintelligible.' 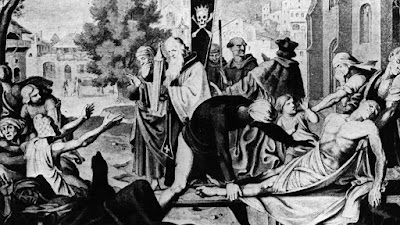 Among the most controversial statements of Pope St. John Paul II was his description of the cultural climate in the modern world – especially in the West – as the 'culture of death'. I shall attempt to say a little about what he meant by this description, and how the Church has confronted such a culture with her own stand for the value of human life in all its stages.

With 'culture of death', the Pope was not only referring to a culture of acceptance for taking life (through, for example, abortion and euthanasia) which also leads to spiritual death, but to a culture based on the Gnostic idea that body and soul are separated from each other. After all, we say that death occurs when this separation takes place:


To rise with Christ, we must die with Christ: we must 'be away from the body and at home with the Lord.' In that 'departure' which is death, the soul is separated from the body. It will be reunited with the body on the day of [the] resurrection of the dead. (Catechism of the Catholic Church, no. 1005)

The idea that it is possible to distinguish between body and soul in the way we treat ourselves and other people contradicts the doctrine that man is a unity of body and soul (CCC 364). It dates back to the French philosopher René Descartes in the 1600s, but has its true origins in Gnosticism – a heresy that has been a thorn in the Church's side since the beginning. [1]

When man is, so to speak, torn apart in this way, there is a danger of thinking that what we do with our body has no bearing on the 'real' person (i.e. the soul or mind). Thus, we can begin to treat the body as an instrument or a means – a dead object or a 'lump of flesh', rather than the physical presence of a living person and thus as an end in itself.


Pope Paul VI writes that technological developments in modern times have made it tempting for man to extend his dominion to procreation – i.e. the transmission of human life (HV 1). This means that the Church's Magisterium must clarify 'the principles of the moral teaching on marriage – a teaching which is based on the natural law' (HV 4). The natural law says that one should always act in accordance with human nature.

Since man is by nature a composite of body and soul – so that the soul constitutes, to use a Thomistic term, the 'form' of the body (CCC 365) – the bodily dimension of man must also be regarded as morally significant, and the body treated in a manner that is in keeping with its own nature. To deny this involves a mental separation of body and soul which, if real, would result in death.

Catholic teaching therefore precludes 'any action which [...] is specifically intended to prevent procreation' (HV 14), including the use of contraceptives and the completion of the marriage act in a way that makes the transmission of life impossible. Such actions contradict the natural end of the act – which is union and procreation (HV 12) – and the spouses' bodies are reduced to instruments of pleasure. This is an objectification which, as we have seen, forms the basis of the culture of death. [2]


With the approval of the Pope, the Congregation for the Doctrine of the Faith writes that the human body, by virtue of its union with a spiritual soul, 'cannot be considered as a mere complex of tissues, organs and functions'; it is 'a constitutive part of the person who manifests and expresses himself through it.' A consequence of this is that 'an intervention on the human body [...] involves the person himself on different levels' (DV 3). We are also our bodies.

The Church's teaching on the right to life from the moment of conception 'is further confirmed [...] by recent findings of human biological science which recognise that in the zygote resulting from fertilisation the biological identity of a new human individual is already constituted.' The Congregation asks a rhetorical question: 'How could a human individual not be a human person?' (DV I.1). On this basis, the Church can never permit procured abortion. [3]

During in-vitro fertilisation (IVF), not all embryos are transferred to the mother's body; many of them are destroyed. But these embryos are 'human beings and subjects with rights: their dignity and right to life must be respected.' Human beings cannot be treated merely as 'biological material', and embryos which are frozen are 'exposed to an absurd fate' (DV I.5). These are some of the reasons why the Church does not permit in-vitro fertilisation.

3. The Gospel of Life (Evangelium vitae)


The Popes do not very often come out with definitive statements that are binding on all the faithful, but in Evangelium vitae there are a total of three such statements. Pope John Paul II invokes 'the authority which Christ conferred upon Peter and his Successors' and confirms that the deliberate killing of an innocent human being (EV 57), procured abortion (EV 62), and euthanasia (EV 65) are deeply immoral actions.

The fact that murder, abortion, and euthanasia are wrong has always been the teaching of the Church, but these statements make it impossible to wiggle out of. The Pope also confronts a very widespread myth, namely that 'contraception, if made safe and available to all, is the most effective remedy against abortion.' The truth is that the culture of abortion is strongest where the Church's position on birth control is rejected, because this leads to a 'contraceptive mentality' (EV 13).

The Pope writes that 'we are facing an enormous and dramatic clash between good and evil, death and life, the culture of death and the culture of life.' In this situation, we have ‘the inescapable responsibility of choosing to be unconditionally pro-life' (EV 28). He also urges Catholics in every country to celebrate an annual 'Day for Life' in their own way (EV 85).

For a Culture of Life


I hope this brief tour of the 'three vitaes' has been helpful. There is of course much more that could have been mentioned, and I encourage you to read all of the documents in their entirety. But, finally, I want to emphasise 'the necessary conformity of civil law with the moral law' (EV 72). A law that permits abortion or euthanasia is an unjust law.

The situation is difficult for Catholics who wish to remain faithful to the teachings of the Church, but we can ask God for help in building a culture of life with love – in our own lives and in our local communities. This is where it begins, with us treating our fellow human beings as persons and ends in themselves. That way, we can begin to turn the cultural trend in the right direction.


[1] Descartes writes, in his Meditations on First Philosophy, that 'nothing else belongs to my nature or essence except that I am a thinking thing; from this it follows that my essence consists solely in my being a thinking thing, even though there may be a body that is very closely joined to me' (6:9).

[2] According to St. Thomas Aquinas, 'the vice against nature [...] attaches to every venereal [i.e. sexual] act from which generation cannot follow' (Summa theologiae II-II, q. 154, a. 1). I will spare you the details.

[4] The first-century Didache, also known as The Teaching of the Twelve Apostles, states that: 'You shall not procure abortion, nor destroy a newborn child' (2:2).
Lagt inn av Vindjo kl. 18:00