'Of course I do not mean that the Gospels tell what is only a fairy-story; but I do mean very strongly that they do tell a fairy-story: the greatest. Man the story-teller would have to be redeemed in a manner consonant with his nature: by a moving story. But since the author of it is the supreme Artist and the Author of Reality, this one was also made [...] to be true on the Primary Plane.' 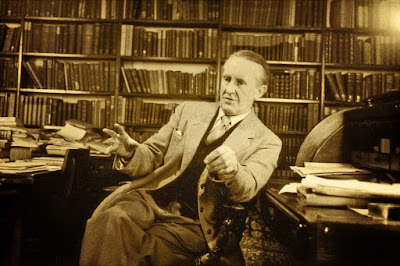 J.R.R. Tolkien (1892-1973) is best known as the author of fantasy novels such as The Hobbit and The Lord of the Rings, but how many know that he was also a deeply believing Catholic who let the faith permeate his imagination? In a letter to a Jesuit priest, he even described The Lord of the Rings as 'a fundamentally religious and Catholic work.' In the following, I shall give an introduction to Christian and Catholic elements in the two mentioned books, as well as in The Silmarillion – a collection of stories from Tolkien's universe, the so-called 'legendarium'.


In The Silmarillion, Tolkien writes: 'There was Eru, the One, who in Arda is called Ilúvatar; and he made first the Ainur, the Holy Ones, that were the offspring of his thought, and they were with him before aught else was made.' This has obvious parallels to God creating the angels, and it is followed by a creation story about the origin of 'Arda' – which is the Elvish name for Earth. The most powerful of the Ainur is called Melkor, and he does not want to play along (literally, since the world is created by music). Instead of serving Eru, Melkor wants 'to subdue to his will both Elves and Men, envying the gifts with which Ilúvatar promised to endow them.'

After Eru has created the Earth, he binds the Ainur to it and from then on, they are called 'Valar, the Powers of the World.' Regarding this creation, Melkor tells the other Valar: 'This shall be my own kingdom; and I name it unto myself!' Another of the Valar, called Manwë, leads the rest of them in battle against Melkor. This is reminiscent of the war in Heaven between Michael the Archangel and Lucifer, which ends with Lucifer being transformed into Satan. In Tolkien's legendarium, Melkor falls into the darkness and is called 'Morgoth'. He takes with him 'the scourges of fire that in Middle-earth were called the Balrogs, demons of terror.'

While the Ainur or Valar in Tolkien's legendarium correspond to the archangels, there are also lower-ranking angels. These are called 'Maiar', and the wisest of the Maiar is called Olórin. Of him, it is said: 'In later days he was the friend of all the Children of Ilúvatar, and took pity on their sorrows.' When Olórin shows up in physical form, he takes the name 'Gandalf'. The other 'wizards' in Middle-earth – Saruman, Radagast, Alatar, and Pallando – are also Maiar. So is Sauron, who becomes Morgoth's servant. But 'in after years he rose like a shadow of Morgoth and a ghost of his malice, and walked behind him on the same ruinous path.'

In connection with the Valar, Tolkien writes about Varda, also called Lady of the Stars, that: 'Too great is her beauty to be declared in the words of Men or of Elves; for the light of Ilúvatar lives still in her face.' Morgoth hates and fears her more than any other creature, and there are many similarities between Varda and the Virgin Mary. The Elves call her Elbereth, and 'they call upon her name out of the shadows of Middle-earth, and uplift it in song at the rising of the stars.' Early in The Lord of the Rings, we get an example of this when Frodo and Sam hear the Elves singing: 'Snow-white! Snow-white! O Lady clear! / O Queen beyond the Western Seas! / O Light to us that wander here / Amid the world of woven trees!'


In The Hobbit, Tolkien writes about Bilbo Baggins that he 'was a very well-to-do hobbit', and that he 'never had any adventures or did anything unexpected'. For this reason, Bilbo is quite reluctant when the strange wizard Gandalf asks him to share in an adventure. Keeping in mind that Gandalf is a sort of angel in this universe, we can compare Bilbo's answer to our own response when God calls us to some task or vocation. Gandalf has to send a company of 13 dwarves for Bilbo to wake up from the safe life in his cosy hobbit-hole, and even then he asks: 'What am I going to get out of it?'

The dwarf leader is named Thorin Oakenshield, and there are some parallels between him and Jesus Christ. First, he has 12 companions, just like the Apostles: Fili, Kili, Oin, Gloin, Ori, Dori, Nori, Balin, Dwalin, Bifur, Bofur, and Bombur. Second, he is on his way to Erebor under the so-called 'Lonely Mountain' to restore his father's kingdom. When he gets there, he declares: 'I am Thorin son of Thrain son of Thror King under the Mountain! I return!' There is a prophecy as to what will happen when he does: 'The streams shall run in gladness, / The lakes shall shine and burn, / All sorrow fail and sadness / At the Mountain-king's return!'

The trip to the Lonely Mountain is comparable to a pilgrimage, and Bilbo makes a journey that is at least as much spiritual as it is physical. In the beginning, he often thinks of 'his comfortable chair before the fire in his favourite sitting-room in his hobbit-hole, and of the kettle singing.' When Bilbo finds the 'One Ring' that has belonged to the creature Gollum, Tolkien writes: 'It was a turning point in his career, but he did not know it.' It is a turning point in several ways, for afterwards we can notice a change in his behaviour. When the quest is ended, Gandalf says to him: 'My dear Bilbo! Something is the matter with you! You are not the hobbit that you were.'

The main enemy of the book is the dragon Smaug, who sleeps on a pile of gold under the Lonely Mountain. The dragon is a well-known symbol of Satan, so we are reminded of Christ's victory over the devil when the dragon is killed. But the symbolism goes deeper. Smaug suffers from something called 'dragon sickness', described as 'the power that gold has upon which a dragon has long brooded'. There is a tendency in all of us to be overly attached to our possessions, and several of the characters are exposed to it. Bilbo, with his great wealth, suffers from dragon sickness already at the beginning of the book. The pilgrimage can therefore be seen as a journey to slay the dragon in his own heart.


There are more Catholic elements in The Lord of the Rings than I can cover in a short article. For example, God's providence is hinted at when Gandalf tells the story of how the Ring was discovered by Bilbo: 'There was more than one power at work', and 'there was something else at work, beyond any design of the Ring-maker [Sauron].' There is talk of the 'Undying Lands' as if it were Heaven, the Elvish waybread that 'fed the will' can be likened to the Eucharist, there are similarities between the Elven Lady Galadriel and the Virgin Mary, and a sort of silent prayer is said: 'Before they ate, Faramir and all his men turned and faced west in a moment of silence.'

But the most pervasive element of the book is the parallels between three of the characters and the three offices of Christ: Frodo is a priest, Gandalf is a prophet, and Aragorn is a king. Frodo is the so-called 'Ring-bearer', and the Ring is a symbol of sin and the Cross. During the council meeting in Rivendell, he shows his willingness to sacrifice himself: 'I will take the Ring, though I do not know the way.' Along the way he is helped by Samwise Gamgee, who is reminiscent of Simon of Cyrene when he carries the Ring for a while. This happens after Frodo is apparently killed by the giant spider Shelob and 'bound in cords, wound about him from ankle to shoulder', as if wrapped in a shroud before his symbolic resurrection.

Gandalf offers advice and exhortations to the other characters, but his most prophetic moment is his true prophecy that Gollum 'has some part to play yet, for good or ill, before the end.' In his betrayal, Gollum is the one who resembles Judas Iscariot the most, but Frodo says: 'But for him, Sam, I could not have destroyed the Ring.' Gandalf hints at the Holy Spirit when he says to the Balrog in the mines of Moria: 'I am a servant of the Secret Fire, wielder of the flame of Anor.' He sacrifices himself for the rest of the fellowship, but rises again in the form of Gandalf the White – 'until my task is done', as he puts it.

In the beginning, Aragorn goes by the name of 'Strider' and nobody knows that he – much like Thorin – is a king in exile. This shines through occasionally, as 'in his living face they caught a brief vision of the power and majesty of the kings of stone.' He heals the sick and wounded with a herb called 'Kingsfoil' (athelas), he goes down to the underworld to free the spirits of the dead, and he marries Arwen – as Christ is the Bridegroom of the Church. The coronation at Minas Tirith is reminiscent of when Solomon was anointed king by Zadok the priest and Nathan the prophet: 'I would have the Ring-bearer bring the crown to me, and let Mithrandir [Gandalf] set it upon my head.'


In an autobiographical letter (the same one in which he claimed to be a hobbit himself), Tolkien writes: 'I am a Christian (which can be deduced from my stories), and in fact a Roman Catholic. The latter fact perhaps cannot be deduced; though one critic (by letter) asserted that the invocations of Elbereth, and the character of Galadriel [...] were clearly related to Catholic devotion to Mary. Another saw [the Eucharist] in waybread (lembas) = viaticum'. Although we have seen many Christian and Catholic elements in Tolkien's works, it was not his intention to write a Christian 'allegory' of the same type as the Narnia books of C.S. Lewis (1898–1963). He wanted to create a myth.

Lewis was an atheist when he first came to the University of Oxford, and it was through conversations with Tolkien (both were part of a literary discussion group called 'The Inklings') that he found his way to Christ. One night, Lewis had said that Christianity is a myth and that myths are lies, even though they are 'breathed through silver'. In response, Tolkien wrote the poem Mythopoeia ('myth-making'), which contains his theory that the greatest truths can be reflected in myths – and the Gospel of Christ is the greatest of them all, since it really happened. Therefore, it is natural that this truth is also reflected in Tolkien's fiction.

A mythopoeic attitude is expressed in The Lord of the Rings, when Aragorn is asked: 'Do we walk in legends or on the green earth in the daylight?' He answers: 'The green earth, say you? That is a mighty matter of legend, though you tread it under the light of day!' Later, Sam wonders 'if we shall ever be put into songs or tales. We're in one, of course'. Even if the stories of our own lives will never be 'told by the fireside' or 'read out of a great big book', we can trust that God has prepared a place for us in His story.
Lagt inn av Vindjo kl. 17:30